History of the Village of Brora, Clyne

Adapted from an article printed in the “Northern Times” 1967. 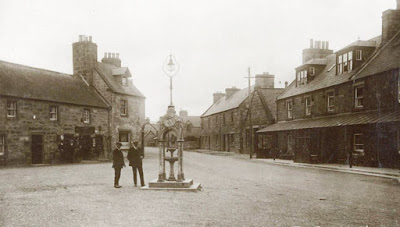 Fountain Square, Brora
The Parish of Clyne extends from the shore of the Moray Firth in a north-westerly direction for 24 miles. Its width on the coast is four miles, and at the inland end it is about twice as wide. A range of foothills divides it into two parts – the small coastal area, containing almost all the arable ground, and the inland district, consisting of pasture, moorland and hill. The name Clyne comes from a Gaelic word Cluain meaning a meadow. The River Brora, the principal stream, rises in the parish of Rogart and has one main tributary, the Blackwater. Less than two miles below the junction, the river flows into the narrow four-mile long Loch Brora, whence it issues to complete its final course of three miles through the coastal district to the sea.
Brora is the only village in the parish. Bruar-a or Brora is a Danish name meaning bridgewater. Originally merely a small community on the south side of the river mouth, it began to extend in the early part of the 19th century and today occupies both sides of the river, is served by the main road and the railway, and has left the old Brora in a quiet backwater.
The upheaval known as the Clearances brought change to Clyne. Close on 1000 people in the parish had to leave their homes, their pastures, and their small arable patches in order that a handful of farmers could put their south country sheep on these greens and moorlands. Many of the evicted went abroad, but later census figures indicated that the greater number found new homes in the “lowland track,” the few square miles of machair between the foothills and the sea. The population figure of 1643 in 1801 jumped to 1874 in 1821 and went back to 1711 in 1831.
While with one hand the House of Sutherland had harshly evicted a multitude, the other hand busied itself in planting industries that might, to some extent, absorb the evicted. At the mouth of the River Brora a harbour was made from which sea-fishing could be prosecuted. Within walking distance of the village were founded a distillery and a brickworks, the coal pit was put in operation again and a salt-making industry revived. The large increase in 1821 - the major Clearances took place a few years earlier – may in part be accounted for by skilled men and their families being brought in from the south to manage those industries and to instruct the local people; also, in part, to some influx from other cleared areas in the county.
Constantly during the last 100 years or so the flourishing industries have been bringing in workers from elsewhere to replace wastage due to emigration overseas and also to the South. The Wool Mills, which were put on a sound footing in 1902 and very much enlarged since then, have taken in, from time to time, a considerable number of skilled operatives from the Border Mills. A wireless station, built over 25 years ago, played a major part in maintaining the figure. Among Highland landward parishes, Clyne is unique in thus keeping up its population, and the loss of many natives has been adequately offset by the number of incomers.

Coal was discovered in the Doll in 1529. In 1573, at Lower Brora, salt production from sea water was started, the fuel being the nearby outcrop of coal. Farther inland the first mine shaft was sunk, in 1598. Credit for this is given to Lady Jean Gordon, widow of Earl Alexander of Sutherland. In 1601 her son, Earl John, impressed by the possibilities of Brora, was instrumental in having it elevated to the status of a burgh of Regality. Although power was given to create bailies, councillors and the like, and also to erect a tollbooth and market cross with a weekly market, also four fairs on feast days, there is no evidence of any of these things having been done, with the exception of holding markets, which is recalled in the name of Market Street, Lower Brora.
Up until 1820 the only road north and south was a mere track by the seashore. By 1840 there were 30 miles of road and 15 bridges in the parish of Clyne. There was a sub-post office with a receiving house built by subscriptions from the inhabitants. The mail coach, drawn by two horses, passed and re-passed daily. The building which housed the post office is still in good condition. In its time it became a shoemaker’s shop and a toy shop, then a dwelling-house, and it is now the Unionist Party’s offices. Whereas, in 1800, there were practically no carts and ploughs, there were 258 carts and 240 ploughs in 1840, all made by native tradesmen. Indeed, skilled tradesmen abounded. There were 5 stone-masons, 9 house carpenters, 12 dyke builders, 3 blacksmiths, 9 tailors, 12 shoemakers and 3 cartwrights, besides journeymen and apprentices.
A market, the last of the season, was held in Brora in October, and was always well attended by the neighbouring parishes. Shopkeepers came from a distance and erected tents to display their goods. A great many cattle and horses were sold. Brora at this time had five inns which used to be crowded for the occasion, as were the tents in the market which sold whisky. Some little time before 1840 a total abstinence society was formed and the innkeepers complained that they sold only a third of the former quantities of whisky. It was, however, a rare occurrence to meet anyone the worse of liquor, except occasionally at markets. Whereas formerly coarse homespun cloth was worn by the girls, they now had dresses of the latest imported fashion, as well as straw bonnets or handsome caps, and their hair was neatly plaited.

The Highland Railway came to Brora in 1871. The results were far reaching. The colliery and brick and tile works, which had been closed, were reopened in 1872 by the Duke of Sutherland. Using Brora bricks, he built an engineering shop where repair work in connection with the railway could be undertaken. On the same site he had a grain store, a weaving shed, a sawmill and an office where colliery business was transacted. He drove his own railway engine on a branch line which crossed the main road, then called Pig Street (now Victoria Road).

Among articles made in the carpentry shop were writing desks and the counters to be used in the Town and County Bank, which was opened in 1874 in Rosslyn Street. In the engineering shop a small engine called “The Florence” was constructed to carry, on the miniature railway, bogies of coal and brick to the railway station and the harbour.

Two freestone quarries, one at Spouty and the other at Brambury Hill, near Clynelish, gave steady work to a considerable number of men, the stone being used for domestic purposes and export. The colliery was eventually leased to Mr Melville, manager of the grain store, and it was worked by him and his son until 1914. Mr R. Mackay, who had been the Duke of Sutherland’s clerk to the colliery, opened a high-class grocery business in Bridgend and afterwards at Bridge House, where he also ha a draper’s shop. The oldest established draper’s shop at this time, opened in 1850, was owned by Mr W. Sutherland, the postmaster. Another long established business was the Sutherland Arms Hotel, built in 1818 by Mr Gordon, of Embo. Towards the end of the 19th century a wool mill was built on the site of the sawmill. It was bought in 1901 by Mr T. M. Hunter senior.
Posted by Unknown at 03:04